The game has been out a week or so – time for some initial thoughts on this hotly rated title. 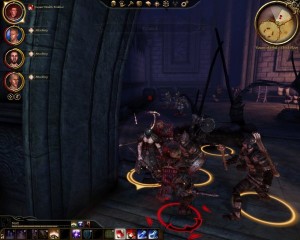 OK so if you don’t already know, the game is by BioWare (and published by EA). BioWare are the makers of such games as Baldur’s Gate, Neverwinter Nights, Star Wars: Knights of the Old Republic, Mass Effect. Dragon Age: Origins is the latest addition to their string of RPG games.

While I remember, you can get an idea of the game by playing the flash-based game “Dragon Age: Journeys” here. It’s got a similar interface and is free for now, although it would seem that past chapter 1 it will be a pay game. However, it links with your BioWare account and you can get a few moderately good items which import into your Dragon Age: Origins game automatically.

That would be a good moment to mention that the game ties in closely with a created EA / BioWare Social account. This keeps track of achievements, screenshots, statistics, characters and more, and allows you to add friends etc. So far, it seems very beta-ish… the social website is a bit haphazard, buggy and poorly designed. Bits are all over the place, with your DA:O profile being physically disconnected from your BioWare Social account apart from a buried link, or the in-game button.

Anyway, the game itself. So, if you don’t know, you have a choice of three basic classes, Warrior, Mage and Rogue. Each has subdivisions on their theme. It would seem that each has its own origin story, a nice touch. It also references the origin story multiple times in the short amount I have played so far, indicating that a good bit of thought has went into this. Your choice of race also has ripple effects in plenty of dialogue and how you are treated.

Those who are used to Baldur’s Gate in particular will notice that the game does not use the Dungeons and Dragons toolset. BioWare did not renew their license to use it so the game mechanics are their own proprietary mechanics. It has the advantage or disadvantage, depending how you see it, of having a LOT less spells and abilities than Baldur’s Gate. This is good though, in my opinion, as the abilities and spells don’t stagnate and their is still plenty of options, although I do miss the staples from the D&D toolkit, like magic missile etc, and knock in particular!

I won’t discuss the storyline as I don’t want to give anything away, and I have not got too far myself anyway. Suffice to say, so far I am interested, although it’s no prize-winning literature! It also has not so far had any feeling of repetitiveness, which is often a problem in RPGs of this type. Less “fetch” type quests so far, and more interesting ones. Plenty of variety in weapons and armour, and characters. Two (with DLC) non-standard characters which use different weapon and armour systems provide a different approach. Party members behave intelligently once set up via the tactics menu, although it is frustrating having to spend level up points on extra tactic slots :S

The interface is clutter-free and simple, showing all the information you will need, and, on the PC version, a resizable quick-bar for spells and abilities, which can be rearranged and locked in place. I would have liked to be able to resize vertically as well as horizontally, but oh well.
The TAB key, as in other BioWare games, highlights and displays things in the interface, which is very useful for discovering items and doors which are in hard to see places.
Something to note that I did not figure out right away, is that ESC hurries dialogue. It will be very useful on occasions, like selling items etc.
A nice feature is the zoom levels. You can zoom between many different grades, which will swap on-the-fly between a top-down, Baldur’s Gate style view, and a third person, Neverwinter Nights style view. Camera can be rotated in either mode, and WASD controls work in both modes to move the current character. There are even strafe controls QE. However, the mouse can also be used to move by right-clicking, which is much easier when in top-down mode.

System-wise, the graphics are excellent, even with just medium settings for me at the minute, due to some slowdown in big battles. There is little lag and the movement is smooth.

That’s about enough for the game. I will now highlight a few gripes :P.
First of all, my extra DLC which I got in the Deluxe Edition. Disappointing. First one, an extra character and quest which are too short and were originally designed to be in the normal game. Second, the Watcher’s Keep. Again slightly disappointed. Short, and once complete, you only get to use its courtyard as your ‘base’! You can’t go back inside, meaning you can totally MISS the exclusive advertised items. Not cool.
Next thing, so far, the in-game money system seems broken. I have never had a significant amount of money, not enough for some of the items on sale that would be really useful. Hopefully, this is just because of where I am.
Another, the locked chests. With no more ‘knock’ spell, only those with good dexterity, cunning and the skills required can open chests, and despite investing a character heavily into these skills for this purpose, I still find a lot I cannot open. This I believe is due to the free order in which the early questing can be done. So I’m having to note where I have missed chests and doors so I can come back to them. Annoying.
Finally, the questing itself. The game has a decent journal to keep track, but it refuses to keep track of a few (minor) side-quest updates. For example, on a side-quest involving delivering something to three people, the journal doesn’t make a note when I visit one. So if I ever forgot which one I already visited… you get the idea. I’m noticing more and more quests exhibiting this phenomenon. There are also still a few bugs, such as a quest I can no longer finish. These really shouldn’t be there anymore.

In summary, despite a few niggles, I’m loving this game so far. It reminds me of playing Baldur’s Gate, and I love that! I can tell I will be getting a lot of hours of playtime in on this game. So far, 8 out of 10, with most of the loss due to the bugs, and the poor value of the current DLC. Recommended game!